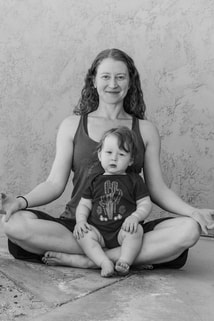 Siri came to yoga through her study of dance starting in 2000 and fell in love with her experience of the body as an unfolding path of wisdom and depth. She became a yoga teacher in 2007 after studying at the Yoga Shala of Portland and then moving to Ananda Ashram in Monroe, New York where she studied Sanskrit, Yoga-Vedanta philosophy and meditation. While living in New York, Siri completed a 100-hour certification in Breath-Centered Yoga with Leslie Kaminoff and a 300-hour certification in Embodied Asana with Amy Matthews. In 2009, she traveled to India for Golden Bridge Yoga's Kundalini Yoga Teacher Training 200-hour intensive and upon her return moved to San Francisco, living and teaching at the Kundalini Yoga Center.

After being inspired by practicing prenatal yoga during her pregnancy, Siri completed Level 1 of the Mama Tree Prenatal Teacher Training with Jane Austin in 2018. Siri brings her personal experience of pregnancy and new mamahood, study of infant movement development and love for the raw power of the body to her prenatal and mommy/toddler yoga classes at Blossom. She loves teaching at Blossom as a space dedicated to the dance of new motherhood and parenting and growing community.
​
Besides dance and yoga and chasing her toddler around, Siri loves to paint and works as an Occupational Therapist with older adults.